Some time ago Antoine “Kermit” Couëtte kindly responded to my question about chart scales by stating that he used 1 cm per nautical mile.  In this post I show how that can be achieved using metric graph paper.  As an illustration I pick the Antares line of position (LOP) from the “many-body fix” example (vessel motion is ignored in this post).

Here we really need to “zoom in” in order to use this scale, so I changed the latitude of the assumed position AP by half a degree to N 31º 30′.  The AP longitude stayed the same at W 15º.

The spreadsheet intercept.xls calculates several characteristics of this LOP.  Besides the usual intercept and azimuth, it also gives its intersections with the AP’s parallel (cell F12) and meridian (cell F15).  This information allows the quick plotting of the LOP simply by marking and connecting these two points.  This technique will not work for LOPs that run close to the cardinal directions, but I believe that it is a good option to have available nonetheless.

After the two points F12 and F15 were connected thus forming the LOP, several measurements were made on the chart to show internal consistency of all the other data computed by the intercept.xls spreadsheet.  The intercept is indeed AWAY (cell E6) with azimuth (cell F6) 152º and it is 3.4 nm (cell D6, allowing about 1 mm for plotting imperfections that only translate to 0.1 nm, which does not degrade the precision achievable in celestial navigation).

intercept: 3.4 nm away from the geographical position (GP) of the observed body 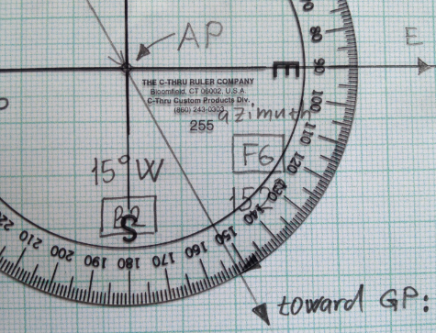 This last piece of information allows for yet another way of plotting this LOP using parallel rules on a chart or a plotting sheet with a preprinted compass rose, as it is shown here.